The Fine Print: How Big Companies Use “Plain English” to Rob You Blind by David Cay Johnston 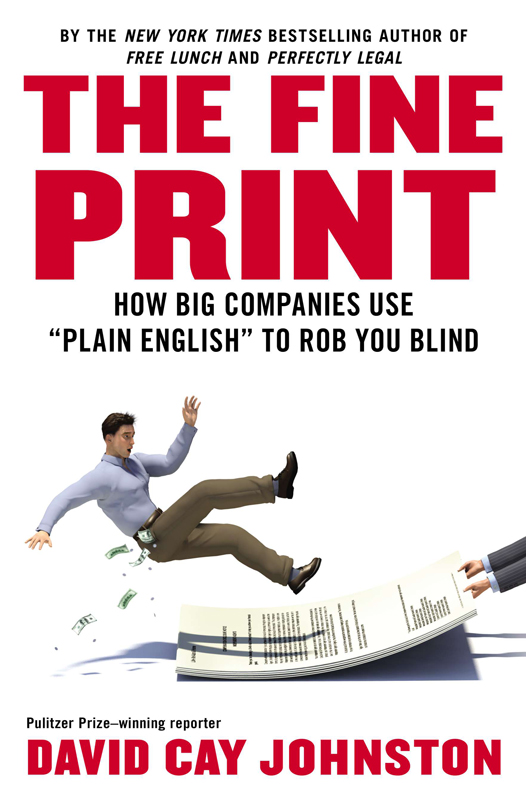 “No other modern country gives corporations the unfettered power found in America to gouge cus­tomers, shortchange workers, and erect barriers to fair play. A big reason is that so little of the news . . . addresses the private, government-approved mechanisms by which price gouging is employed to redistribute income upward.”
You are being systematically exploited by powerful corporations every day. These companies squeeze their trusting customers for every last cent, risk their retirement funds, and endanger their lives. And they do it all legally. How? It’s all in the fine print.
David Cay Johnston, the bestselling author of Per­fectly Legal and Free Lunch, is famous for exposing the perfidies of our biggest institutions. Now he turns his attention to the ways huge corporations hide sneaky stipulations in just about every contract, often with government permission.
Johnston has been known to whip out a utility bill and explain line by line what all that mumbo jumbo actually means (and it doesn’t mean anything good, unless you happen to be the utility company). Within all that jargon, disclosed in accordance with all legal requirements, lie the tools these companies use to rob you blind. Even worse is what’s missing—all the contractually binding clauses that companies hide elsewhere yet still enforce and abuse. Consider, for example, how:
Johnston shares solutions you can use to fight back against the hundreds of obscure fees and taxes that line the pockets of big corporations, and to help end these devious practices once and for all.
<-Back to Recommended Reading
Copyright ©2023 - Carlyle Fielding Stewart, III, All Rights Reserved.