The Gardens of Democracy: A New American Story of Citizenship, the Economy, and the Role of Government 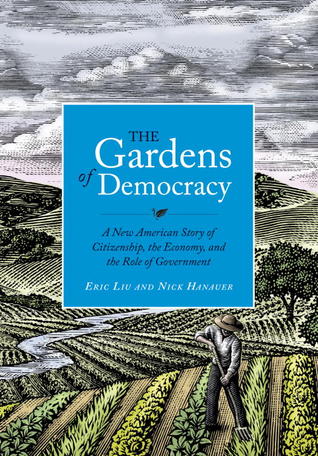 American democracy is informed by the 18th century’s most cutting edge thinking on society, economics, and government. We’ve learned some things in the intervening 230 years about self interest, social behaviors, and how the world works. Now, authors Eric Liu and Nick Hanauer argue that some fundamental assumptions about citizenship, society, economics, and government need updating. For many years the dominant metaphor for understanding markets and government has been the machine. Liu and Hanauer view democracy not as a machine, but as a garden. A successful garden functions according to the inexorable tendencies of nature, but it also requires goals, regular tending, and an understanding of connected ecosystems. The latest ideas from science, social science, and economics—the cutting-edge ideas of today–generate these simple but revolutionary ideas:

True self interest is mutual interest. (Society, it turns out, is an ecosystem that is healthiest when we take care of the whole.)

Freedom is responsibility. (True freedom is not about living some variant of libertarianism but rather an active cooperation a part of a big whole society; freedom costs a little freedom.)

The Gardens of Democracy is an optimistic, provocative, and timely summons to improve our role as citizens in a democratic society.