The Man Who Sold the World: Ronald Reagan and the Betrayal of Main Street America by William Kleinknecht 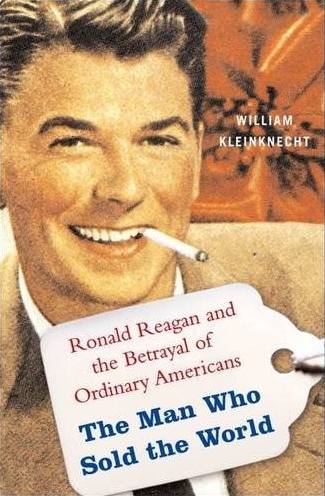 This title is from an award-winning journalist, a major work of reporting and history that shatters the myth of Ronald Reagan. Since Ronald Reagan left office – and after his death especially – his influence has loomed over American life. Singled out for his ‘courage, his kindness, his persistence, his honesty, and his almost heroic patience in the face of setbacks’, a number of conservatives, from the late William Buckley to his former speechwriter Peggy Noonan to Republican nominee John McCain have looked to Reagan as a figure to regenerate the American conservative tradition as the Bush White House stumbles through crisis and scandal. This carefully calibrated image is a complete fiction, however. The Reagan presidency was epoch-shattering, but not – as his propagandists would have it – because it invigorated private enterprise, toppled the Berlin Wall or made America feel strong again. Rather what gives Reagan such an awesome legacy is that he presided over the dismantling of one of the greatest social experiments in human history-an eight-decade period of reform in which working people were given an unprecedented sway over US politics, economy, and culture. Reagan halted this forward march toward democracy almost overnight. In “The Man Who Sold the World”, journalist William Kleinknecht explores Middle America and shows how Reaganism put the poor and working class back on the margins of everything except the basest popular culture. This scathing indictment of the Reagan legacy is the first comprehensive book to deal seriously with Ronald Reagan’s place in contemporary America. Just as Americans are trying to grapple with the legacy of George W. Bush, “The Man Who Sold the World” shows how poorly we understand Reagan’s.