Taking Food Stamps from the Needy: Repo of the Fish and Loaves 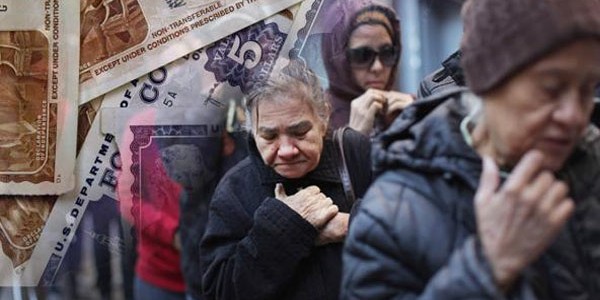 Anyone who is taking food stamps from the poor and needy, while claiming to be Christian, either misunderstands what it means to be Christian or they are being thoroughly dishonest with themselves and others. Anyone claiming that Our Lord and Savior Jesus Christ would approve of such actions has not read the Gospels and is totally misguided in their understanding of the meaning and purpose of Jesus’ ministry – and of the values and essence of his spiritual teachings. Every time I hear so-called politicians professing to be righteous, God-loving Christians, while taking away the basic means of subsistence from everyday people, I am deeply incensed and saddened.  There is no way on earth that Jesus would approve of their actions. There is just no way that Jesus would justify the confiscation of resources from the poor, the working poor at that. This action simply goes against the core values of the Christian faith and makes a travesty and mockery of the Christian moral imperatives of loving our neighbors and caring for “the least of these” among us.

Jesus was concerned about the dispossessed and displaced people of his times. He ministered largely to a peasant population, those who were sick and hungry and lost and lonely. The social and political conditions in which Jesus ministered to the people were not unlike the challenging conditions that we see today. The rich ruled over the poor. Material resources were scarce. Many in the upper classes were more interested in maintaining power and unbridled access to those amenities which ultimately made comfortable their lifestyles, without regard to those in need.

In reading the Gospels in particular, and the Bible in general, we should discern the social, political and cultural contexts of scriptural texts. We must understand that the people of Jesus’ time were then, just as we are today, faced with social and political challenges to living out their faith. Scholar and church historian, Larry Murphy, reminds us that we tend to read the Bible as sacred history and not as real history, so we miss the true import of the social and economic realities and conditions experienced by the people who were living at that time. Our reading of the Bible tends to be theological or spiritual, and so we seldom discern the political and social realities that influenced the formation and emergence of the biblical texts.

What we do know is clear: Jesus was not anti-poor. Jesus was focused on the reality of need without the ability to provide for one’s self. Therefore, Jesus did not believe in taking away what little resources people who were in need had in hand.

Matthew 14:13-21 tells of a challenging situation. The disciples urged Jesus to disburse the people who had gathered outside of the town, for there were but five loaves of bread and two fish – so they imagined a rapidly unfolding disaster.  Resources were short. The need was high. The NIV text reads, “the number of those who ate was about five thousand men, besides women and children.” Jesus fed the crowd and there was more than enough to go around.

We read this text and focus on what Jesus did, how Jesus miraculously multiplied and extended few resources to feed so many. But we gloss over an equally important part of this text – when the disciples told Jesus, “Send the crowds away, so they can go to the villages and buy themselves some food.” This is key text, for at that moment, Jesus displays compassion born of his understanding that sending people back to their hovels and homes while they were hungry was cruel. He knew that many of them did not have bread at home.

Thus in our theological reading of this miracle of the Bible, we miss the underlying social conditions that served as the backdrop to the story. Too often, we get the theological lesson without addressing the social conditions that brought about that demonstration of faith. This means that our analysis of the text often lacks the sophisticated hermeneutics that helps us to get a more complete picture of the events informing the passage of scripture.

It’s equivalent to people attempting to understand your personal story in the present day context without considering the social and economic realities confronting you in the world each day. A theological reading of your present situation must take into account the everyday social realities or sitz im leben or the “life setting” of your daily experiences.

The worship of God involves the attainment of spiritual as well as material bread. Jesus had a real ministry to real people who suffered just as people suffer today. He ministered to their minds, bodies, souls and stomachs. Jesus was concerned for their healing and feeding and cared for them as total persons to make them well and whole.

When you read the Bible theologically also read it culturally and socially. Know that people in biblical times were hungry, sad, sick, depressed and oppressed. How do you teach a person theologically when he or she is hungry? You feed him first. And then you teach him!

So when politicians taking resources away from the needy and glibly spout that their mistreatment and oppression of the poor is morally justified, from a Christian perspective, they are wrong! As followers of Christ, they should know better. Jesus would never support such actions and would never permit such persons to rip bread from the mouths of the poor. By taking their bread, they are taking their livelihood, their dignity and humanity. They are, in a sense, taking God’s name in vain because Jesus would never ever advocate this. Never!

So people should stop hiding behind Jesus as they mistreat the needy. They should stop cherry-picking sentences from scripture as they “proof text” the Bible to justify their “crimes.” They should start reading their Bibles from a social perspective to get an understanding of what Jesus’ ministry really meant – means – and begin practicing their faith from this grounded and informed, substantive foundation.

Interpreting scripture to biblically and theologically justify that which is unethical, immoral and unchristian is reprehensible. People in general and politicians specifically should stop doing it!

We should all repent of our sins – those who sanction this practice and those who look the other way. We should use all the resources and powers that we have at our command to make the world better by helping the poor and by refusing to justify their mistreatment. Taking food stamps from the needy is not only unchristian, it is unconscionable and Jesus would never approve.

So politicians, please stop using Jesus as a cover for the disenfranchisement and abuse of the poor – and stop using the Bible as a means of legitimizing malice, malevolence and ill will toward others. Stop using religion as a cover for hurting people who need help. Stop using government, which is called to help those in need, to take bread away from the hungry.