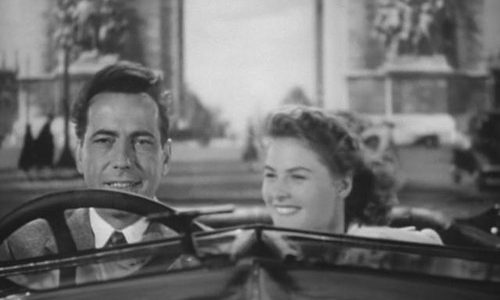 Rick Blaine knew when he said “We’ll always have Paris,” to Ilsa in their last moments together that he’d probably never see her again in this life, but they would always have the enchanted nights and sweet scented memories of Paris.

A Shakespearean parting with such sweet sorrow means adieu to Ilsa amid the fog husks and fainting midnight whispers at the Casablanca air departure terminal.

Rick might have dreamed that if perchance she miraculously came back into his life post Victor Laslo, at the end of the beginning or the beginning of the end Rick’s beautiful friendship with Louie, it would be a proper denouement to a love that could not be purloined as time went by.

But they did have Paris and that’s all that matters and had they reunited, love might have mysteriously promenaded them back to Paris and even to America with grand and spectacular redux.

But what if they’d had Pittsburgh?

Had they gone to Pittsburgh would they have ever returned to Paris?

And the clean, open sidewalk cafes of Paris?

See Rick meet Ilsa at the Cafe La Belle Aurore, Sartre (No Exit) with Camus (the Absurd, the Stranger) with philosophers, scientists, artists, writers, poets and musicians of every ease and infirmary gathering for coffee and du vin while musing the problems of the world.

And what of a wistful Miles Davis -Les Fleurs du mal- amid Blakes grain sand lamentations of the expatriate’s return to America sans the beautiful Juliette Creco?

Cousin Arthur Stewart Farmer who once lent Miles Davis his horn played trumpet and flugelhorn precociously at clubs in Paris before moving to Vienna.

Must we go on about Pittsburgh a lovely city with friendly people?

I love Pittsburgh. I’ve been there many times.

I love Paris. It gives me the edge. I’ve been there a few times.

Perhaps Rick and Ilsa would have loved Pittsburgh too.

“So what about the climate?

Well, I know there to be an occasional fog .

But what about the smog?”

“Well, yes, I mean I don’t know. I can’t say. You’d have to choose which city is best or worse on a sunshiny, clear day.”

“Which city is more romantic?

“The two cities have some things in common.

They both have waterways, arching monuments, lovers wooing, romantics cooing and begin with the letter “P.”